This news of a pond excursion in late June gives us an inspiring glimpse into the world of our Waterways & Ponds project work.  Written by David Dewsbury, Project Leader for several Foresters’ Forest projects.

One nice sunny day the last week of June we thought we would go and visit some of the ponds which have been created by the Foresters’ Forest Programme at Crump Meadow to see how they were faring during this very dry spring. Creating new ponds is always a bit of a worry in case the ground does not hold water and your effort is not well rewarded. To our pleasant surprise, all six ponds were holding water very well and many of them were being patrolled by several male dragonflies. Walking up from Cinderford Linear Park, through the barrier by the Sewage Works and then taking the right-hand fork we passed 3 ponds on the left-hand side, two by the track and one set a bit further in. They all had male broad bodied chasers, their bright blue bodies whizzing across the surface, each trying to out-manoeuvre the others to keep themselves ready to intercept any female who might come along. The females have bright orange bodies but are no less striking. 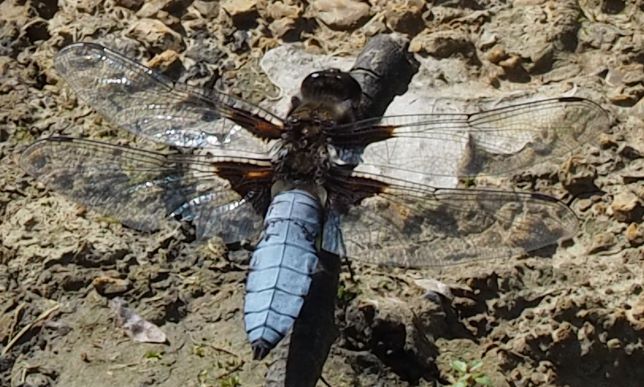 Carrying on up the track, on reaching the summit where it levels out, there is a wonderful pond on the left side which was almost still full of water. Quite remarkable in this dry weather. There is a lovely view across the top of the water and out towards Cinderford. The ground around the pond still looks a bit bare but it will eventually become covered with herbs which will sustain the caterpillars of many butterfly and moth species. All the better if the soil is too poor for rampant plants such as nettles and brambles; although these too are important for some things. Once the tree planting becomes more established it will be a lovely spot. 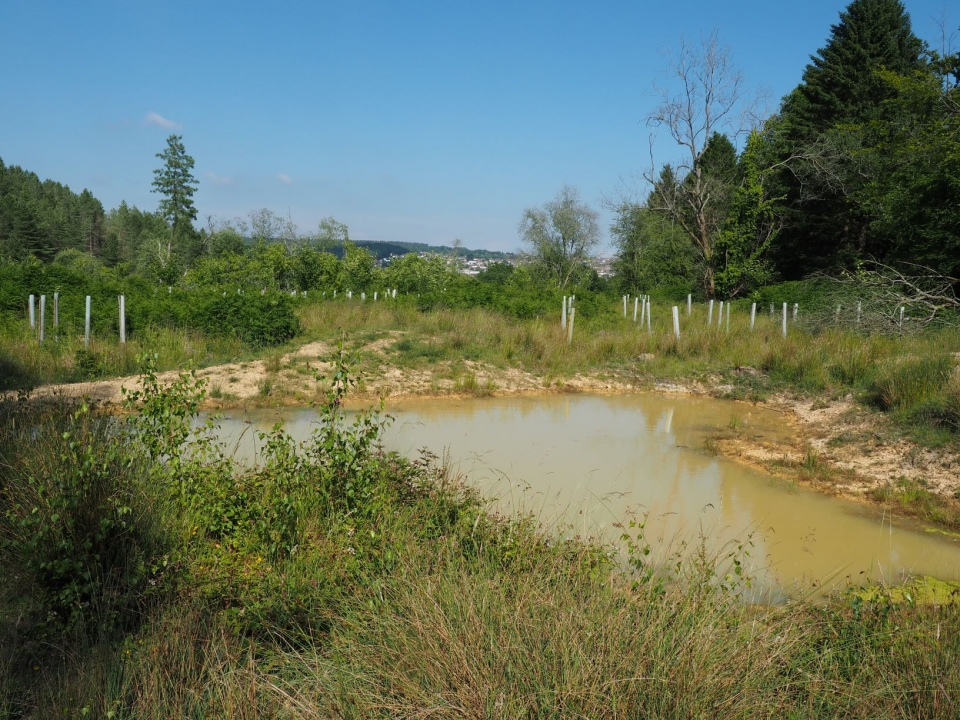 Above: The view out to Cinderford

The jewel for us though was the pond just before this on the opposite side of the track. This is the site of an old pond which supplied water for the machinery of the Crump Meadow Mine. This pond is shown on the Ordnance Survey Map and we looked for it over 10 years ago. It had long since dried up though because all the water flowing towards it had been diverted by a ditch to run quickly off the hillside which was rather a shame because there is then little benefit for wildlife. The ditch was blocked up by Shaun Hancox and his team and two ponds re-excavated. We believe the wall between the two may have acted as a silt trap so that clean water could be drawn off from the lower one. 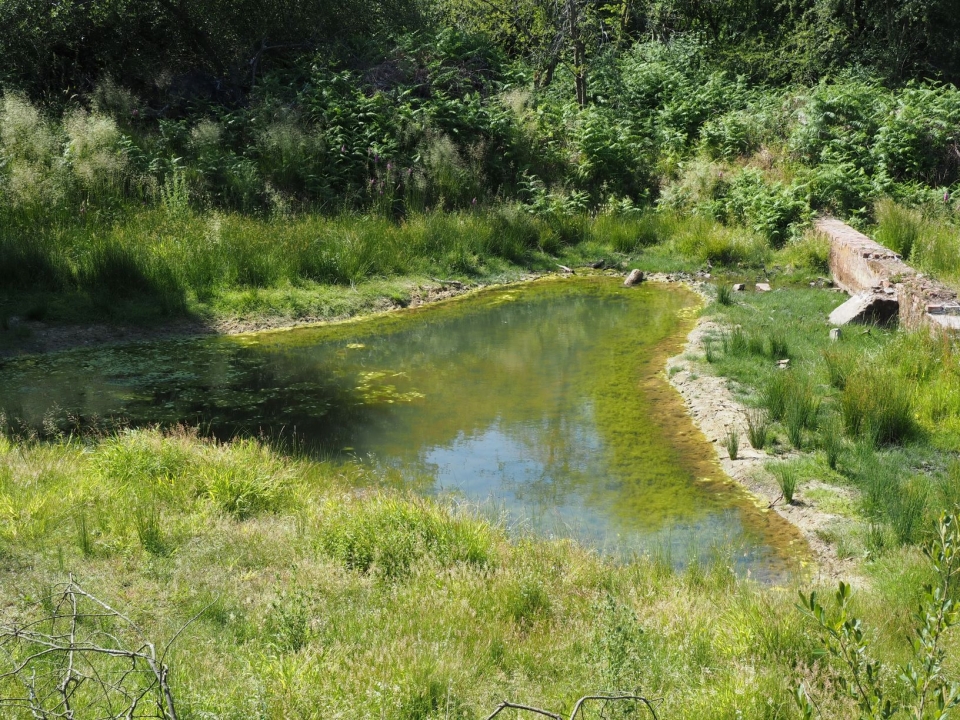 On the day we visited, the pond was basking in sunshine and there were many dragonflies vying for control of this very desirable territory. The one which stood out was a male Emperor Dragonfly, the largest type in the UK.  His body is a vivid blue, flashing in the sun as he sails majestically over the pond, making sure no other male ventures in. He paid very little attention to the broad bodied chasers with their more rapid wing beat and smaller size. However, they had better not be too complacent as he can be quite partial to smaller dragonflies or butterflies for lunch.

There were quite a few aquatic invertebrates such as water beetles and back swimmers which had moved in since this pond appeared 18 months ago. 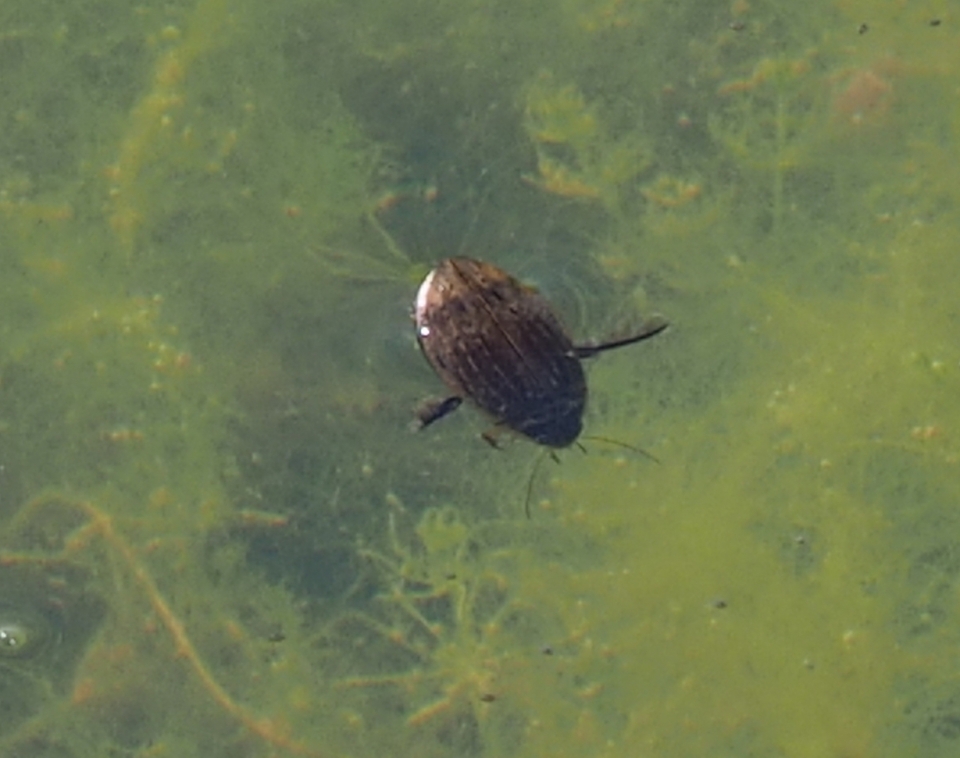 Above: A water beetle up for air

We were too late this year to look for newts. Any that may have moved in will have left the pond to look for food on land. They will return in Spring to lay their eggs so why not join us in April to see how many have moved into this wonderful series of new ponds. Watch this space for a date and hopefully we will be able to gather together again and admire our wildlife.

In the meantime, why not take your picnic on a sunny day and sit by this pond and just watch the dragonflies and other wildlife of our wonderful Forest of Dean.