We are delighted to confirm that all ten of the Foresters’ Forest Blue & Green Plaques are now proudly displayed throughout the Forest of Dean!

The plaques and the people they commemorate represent significant and wide-ranging aspects of the Forest’s history and heritage.

From mid-April through to mid-June there has been a flurry of activity to install the plaques and to celebrate with plaque ‘unveiling’ ceremonies.

The following article shares how we marked these occasions, including details of each of the plaque locations in the Forest of Dean.

Our thanks go to the local historians and community representatives who nominated and championed our plaque recipients, along with local media and our programme partners who have helped us promote the plaque scheme. 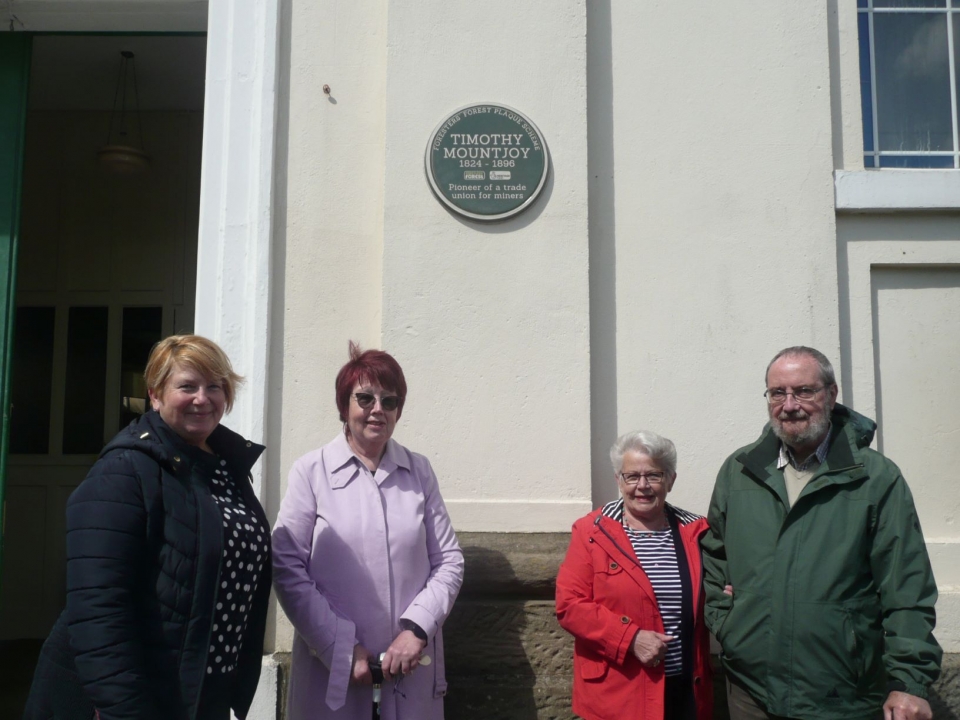 At Cinderford Baptist Church a small group met to celebrate the green plaque for Timothy Mountjoy (1824-1896). The event was attended by members of the church and Cinderford Town Council.  A prayer was said, and a commemoration speech, provided by Dave Kent, Town Clerk for West Dean Parish Council who championed this plaque nomination, was read aloud by Chris Hughes. The speech mentioned:

“Timothy Mountjoy was one of the pioneering union workers who tried hard, with eloquence, compassion and humanity, with some success and failure, to remedy the poverty, hardship and squalor of the Victorian Forest. ” 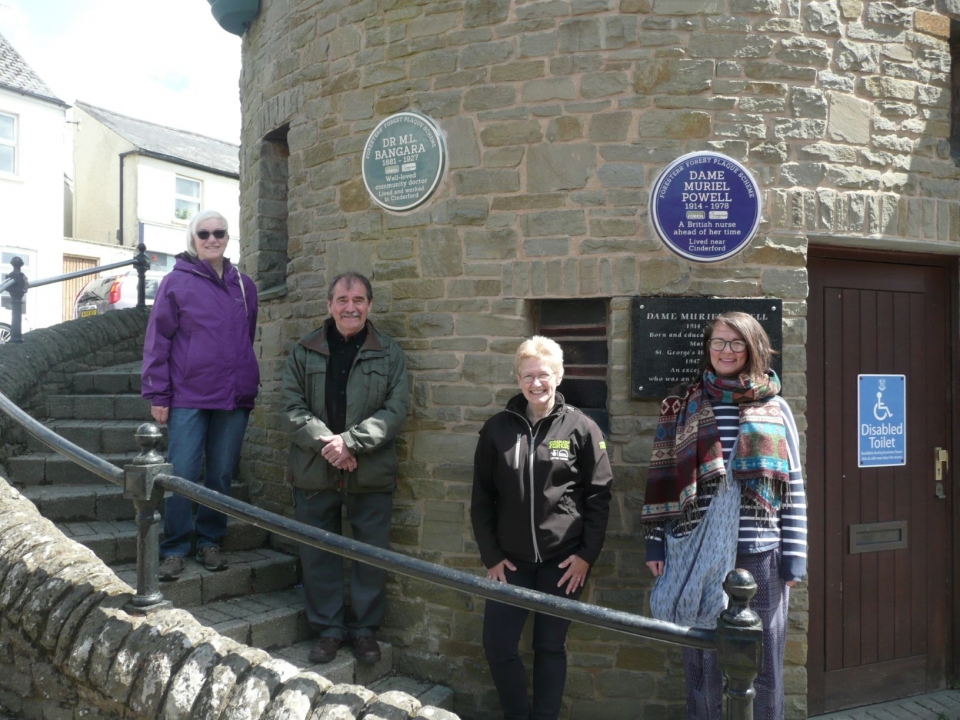 Two plaques, a blue plaque for Dame Muriel Powell (1914-1978) ‘A British nurse ahead of her time’ and a green plaque for Dr ML Bangara (1881-1927)  ‘Well-loved community doctor’, were then revealed on Cinderford Clock Tower by Cinderford Town Councillors Graham Morgan and Sally Reader. 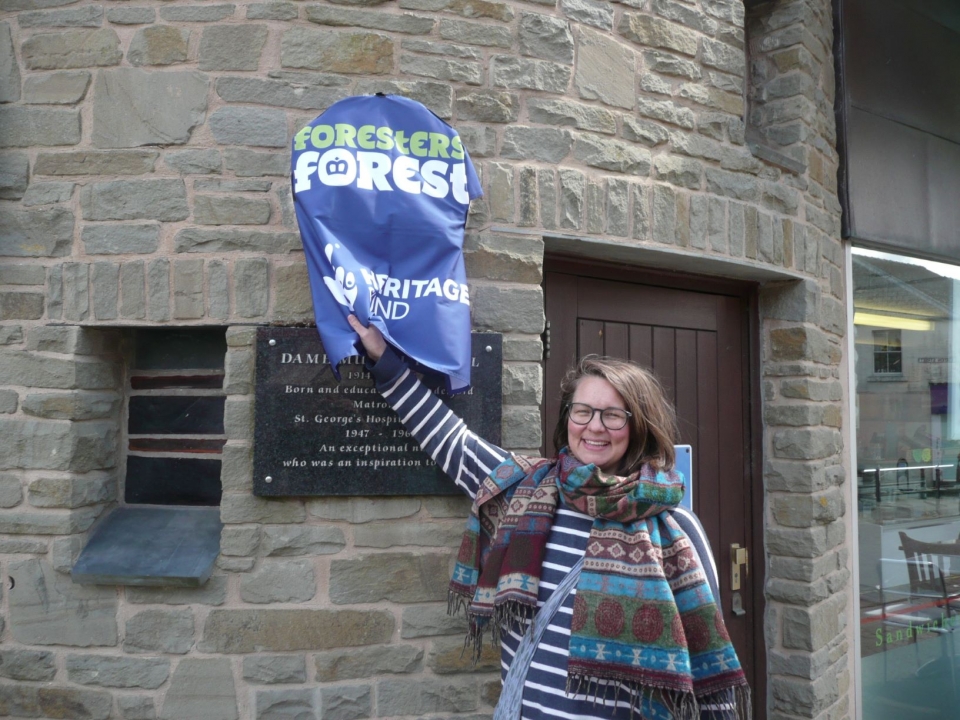 Speaking about Dame Muriel Powell, the only woman to be recognised with a plaque, Cllr Reader (pictured revealing plaque) said:

“I wanted to ensure that a woman was championed for a plaque. Dame Muriel was so ahead of her time; her writing and approach to nursing has been adopted as a gold standard. I admire her as a nurse and historical figure – a woman at the forefront of her field at a time when that was unusual.” 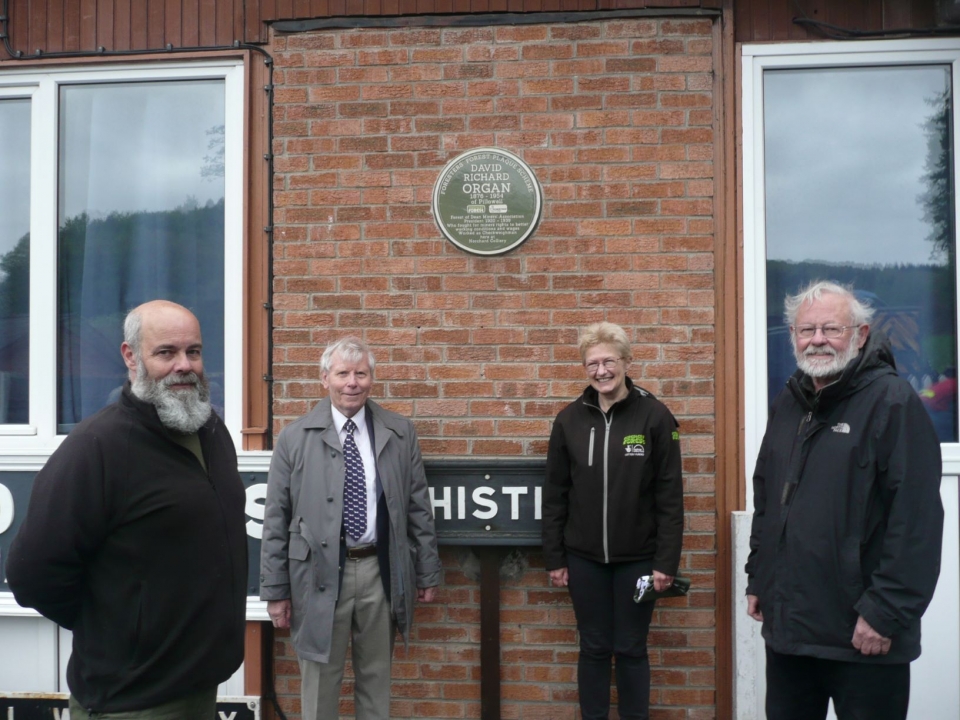 A dedication speech was given by David R organ’s grandson, Dave Organ (2nd left in picture,  who mentioned:

“David was a man of great conviction who had a special passion for fighting for the rights of the Miners to a decent living wage and safe working conditions. He fought long and hard to try to secure these rights and was a very popular leader of the Forest of Dean Miners.” 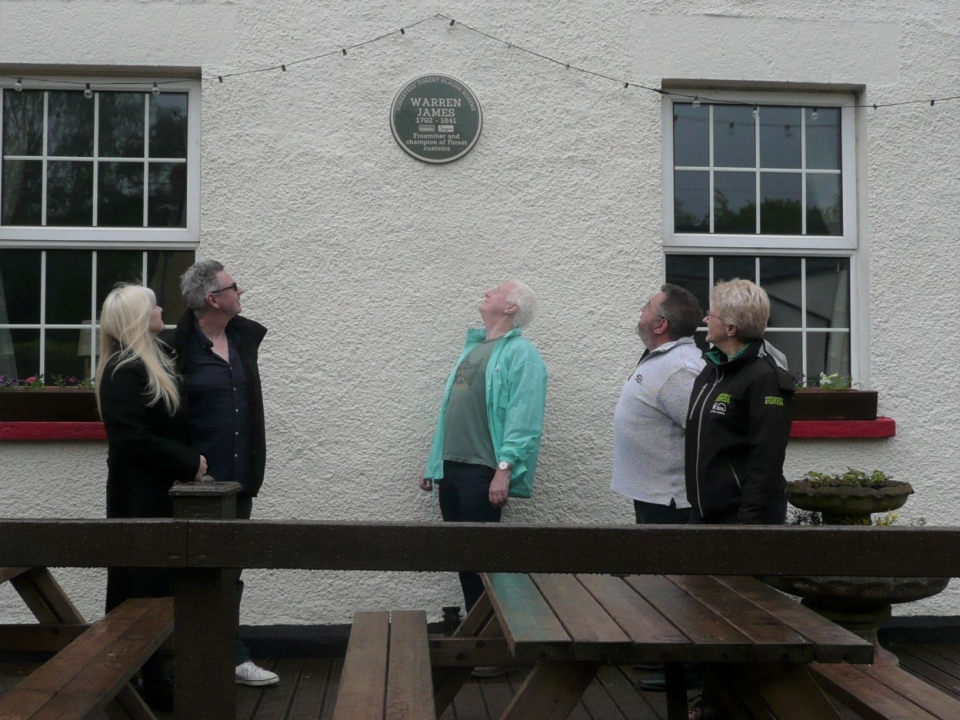 “Warren James was a champion for free miners and the rights and customs of Foresters. The story of Warren James, the community resistance to enclosures and the defence of free mining rights has helped shape the spirit of the local community. It captures the spirit of independence and determination held dear by people who live in the Forest.”

The poet and broadcaster FW Harvey DCM is remembered with a blue plaque, at Yorkley Community Centre. Family relatives, Harvey Society members and Foresters’ Forest were present to raise a toast and celebrate the plaque's unveiling. 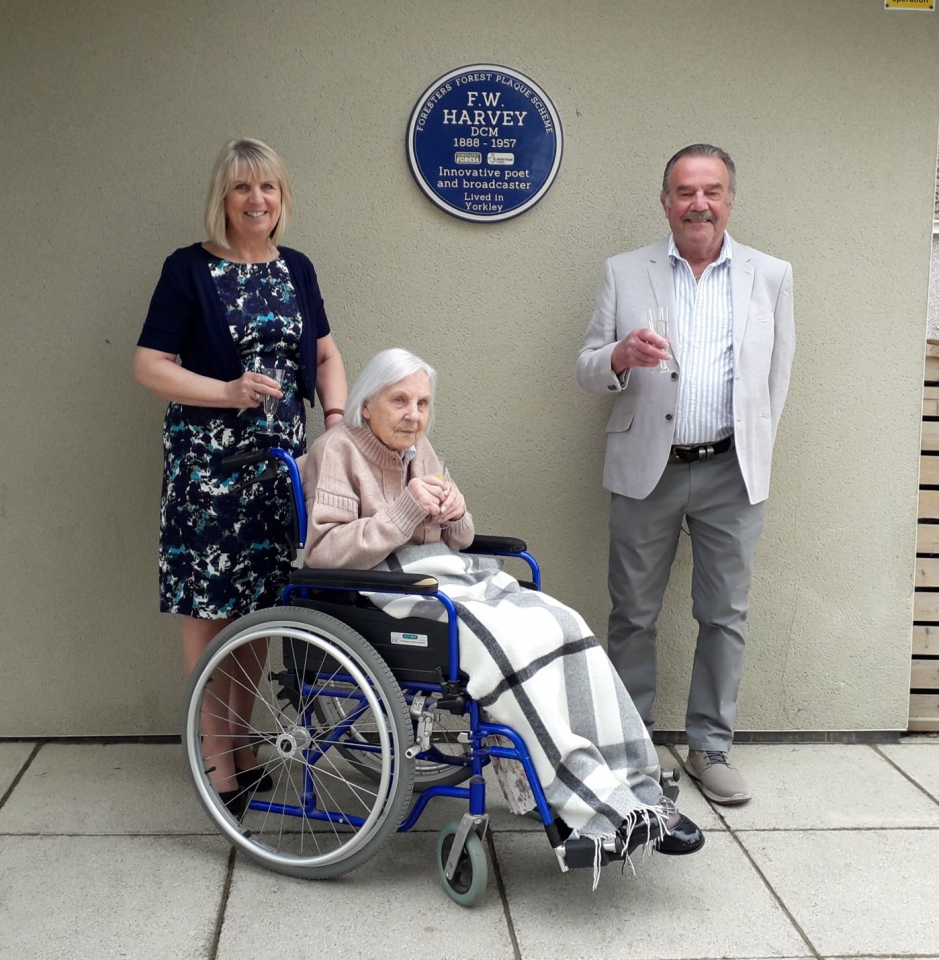 Eileen (FW Harvey’s daughter) and Elaine (his granddaughter), pictured in photo with Steve Cooper of the FW Harvey Society, unveiled the plaque and Elaine shared these words:

“Thank you to Foresters’ Forest for awarding this plaque to commemorate the life of FW Harvey in a very fitting place, amongst the beautiful Yorkley woods, beside the Cenotaph and the Community Centre. Three things were so important to him: the Forest, his fellow man and of course his comrades.  FW Harvey: special man who gave so much to the village, the Forest and our Country, and asked so very little in return.” 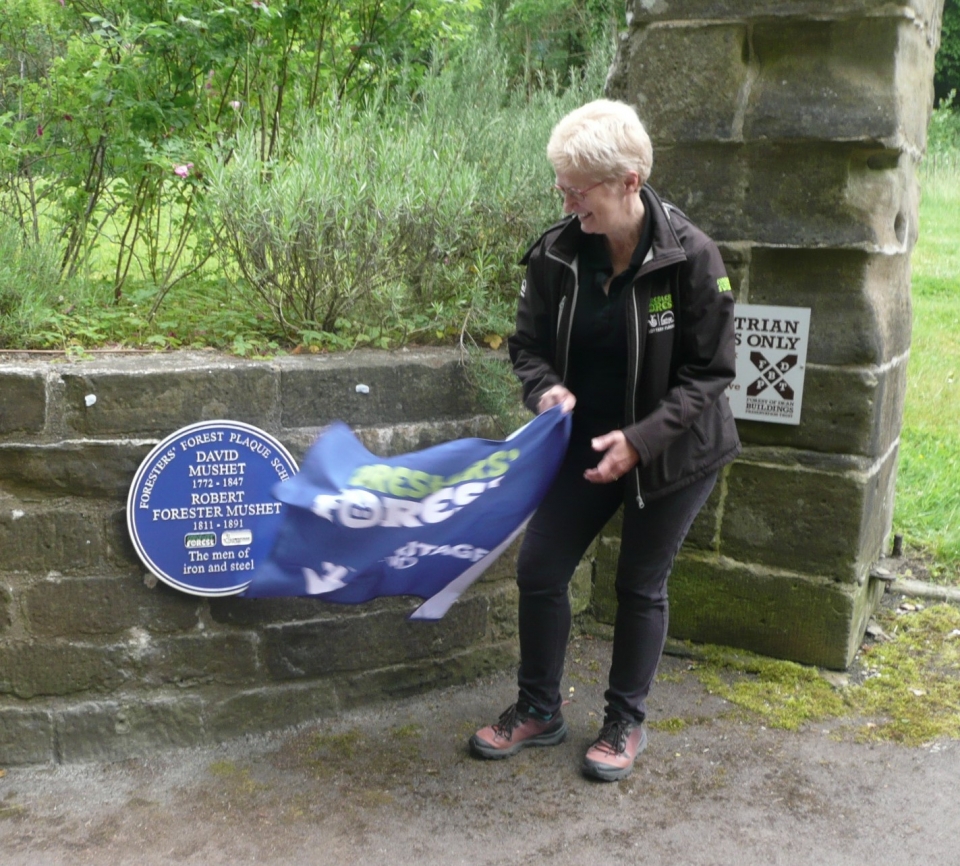 The Mushets, the Forest’s ‘Men of iron and steel’, are remembered with a blue plaque at Whitecliff Ironworks. The plaque was unveiled on 18th June with Coleford’s Mayor, Trustees of Forest of Dean Building Preservation Trust and members of the Forest of Dean Local History Society and Foresters’ Forest in attendance.

The other three plaques

Here are details of the other three historic heroes we have commemorated with plaques, along with the plaque locations: 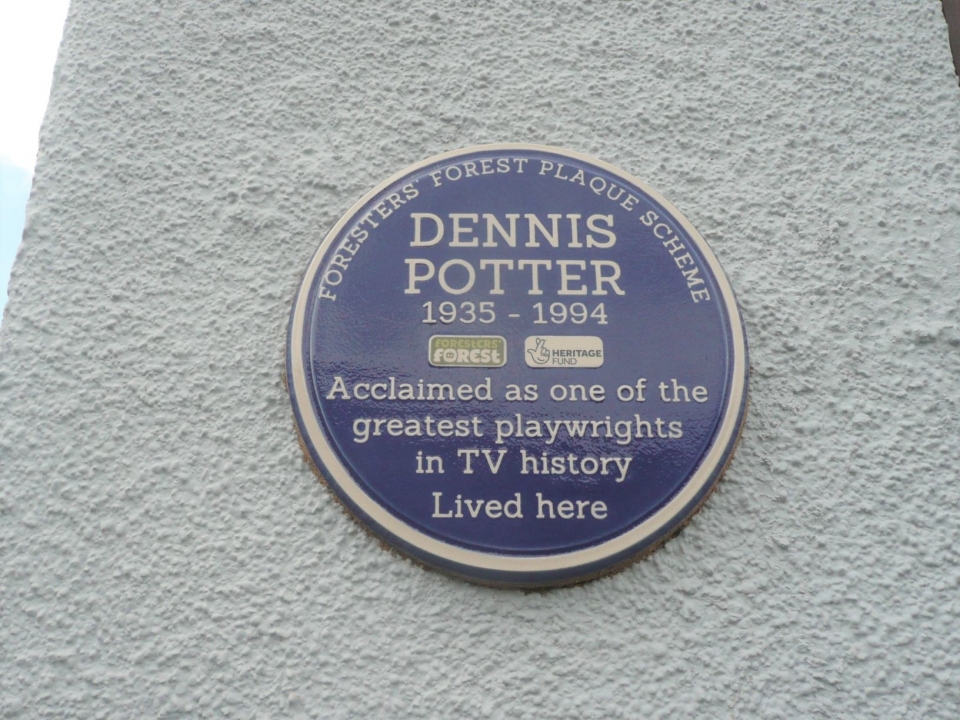 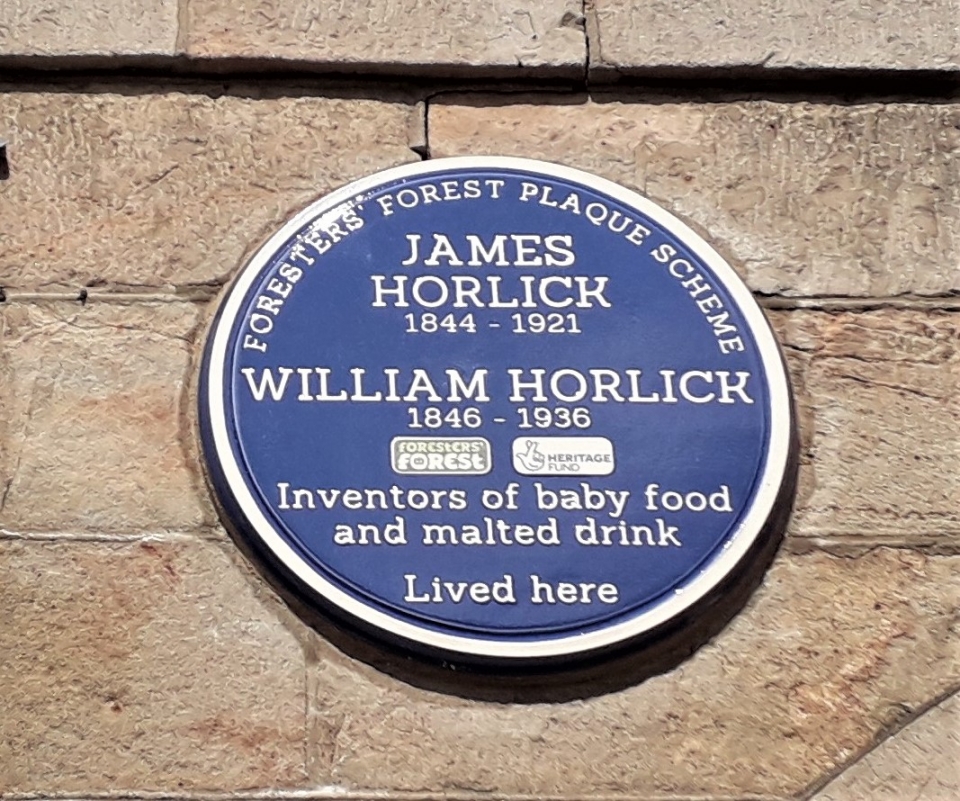 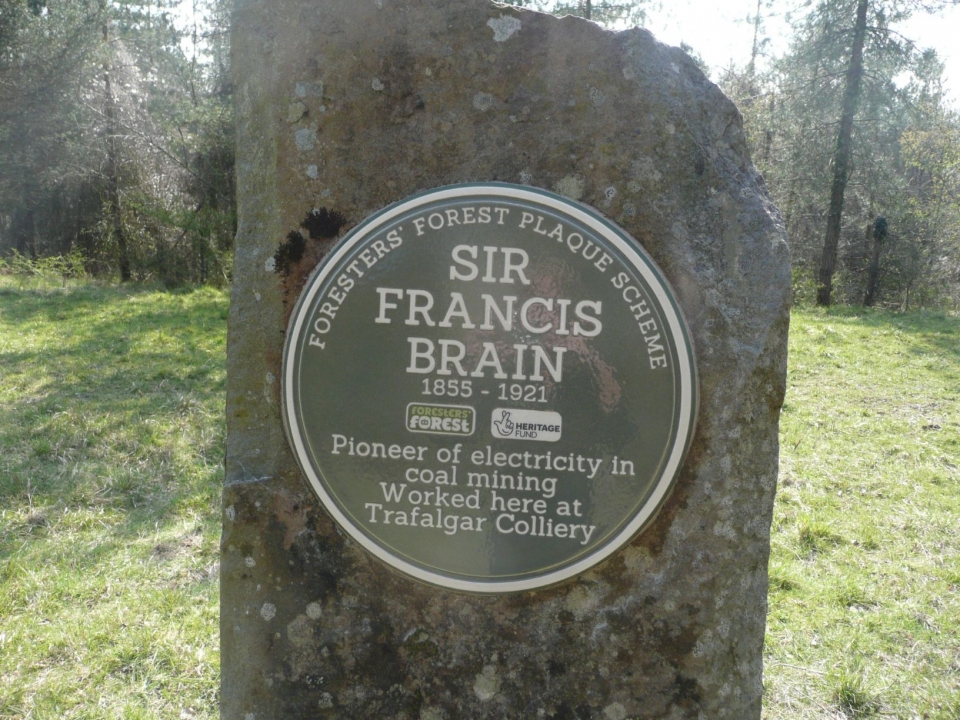